Monroe felt home the second he set food in our apartment. Like a rocket he was shooting from one end to the other of our place. Jumping on couches and beds as if he had wings... we were amazed, since we have been told that bigger steps are hard on those short legs.

It was fun to watch him full of energy checking and sniffing every single spot. Soon he claimed his personal spots:

the couch in the kitchen 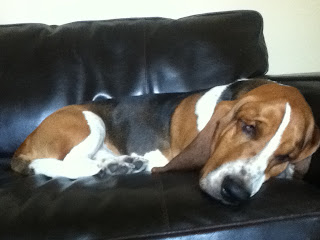 &
the bed in the music room 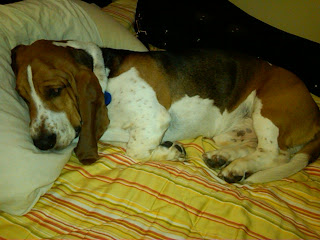 Honestly, who has a heart to tell an all snuggly and sleepy basset NO or GET OFF?! Not me - and neither has Spencer. So we let him explore, run, jump, snuggle, sleep and repeat all day. We were so happy that Monroe settled in so nicely.
That night we had a little welcome home party, where  we introduced Monroe to some of our friends. He was the big star and even after demonstrating his FOOD NINJA skills aka COUNTER SURFING mastery, everybody was quite impressed how comfortable Monroe was even after just a few hours in his new home.
After a nice party, we all went to bed to catch some sleep. Our furry friend was exhausted all day next day. He is a little ballerina: Dance all night and sleep all day!
The following few days brought quite some changes. Monroe has been described as shy towards people and other dogs - which soon was to go away. It only took a few days till he wasn't hiding from other passing dogs anymore. He turned my heart attack into pure excitement when those two unleashed golden retrievers ran towards him. For the first time he didn't shy away, instead he did his dog-thing: sniffing butts etc and played with them happily.
It took him a while to overcome his "fear" of tall loud men, but due to a secure good loving home, he is now a confident pup ... in certain regards a little too secure, but way to cute to be called off. Can you blame him?!
Posted by Julia at 2:04 PM

I was found as a stray in the state of Indiana. Basset Buddies Rescue took me into foster care and quite a few days later to a meet and greet in Oswego, Il. It was the day of July 13th when I first met Spencer and Julia - who took me a week later for a car ride to Chicago, Il. Watch out dawgs! There's a new dog in town!

Julia
Chicago, IL, United States
I am a German Fräulein who came to the US in 2007. These days I live, laugh and love with Spencer (2 legs) and Monroe (4 legs) at the north side of the beautiful city of Chicago.